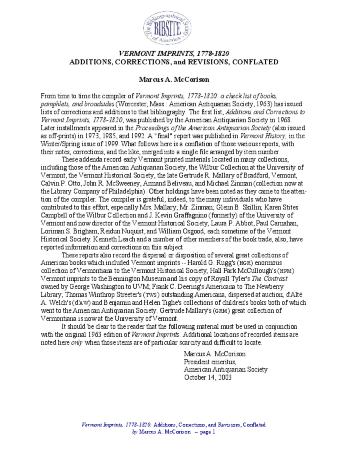 This chronological bibliography is a compilation of various corrections and additions to Vermont Imprints, 1778-1820: A Check List of Books, Pamphlets, and Broadsides (Worcester, Mass.: American Antiquarian Society, 1963). It conflates information in several published lists: Additions and Corrections to Vermont Imprints, 1778-1820, published by the American Antiquarian Society in 1968; later installments that appeared in the Proceedings of the American Antiquarian Society (also issued as off-prints) in 1973, 1985, and 1992; and a “final” report published in Vermont History, in the Winter/Spring issue of 1999. These addenda record early Vermont printed materials located in many collections and they also record the dispersal or disposition of several great collections of American books that included Vermont imprints.